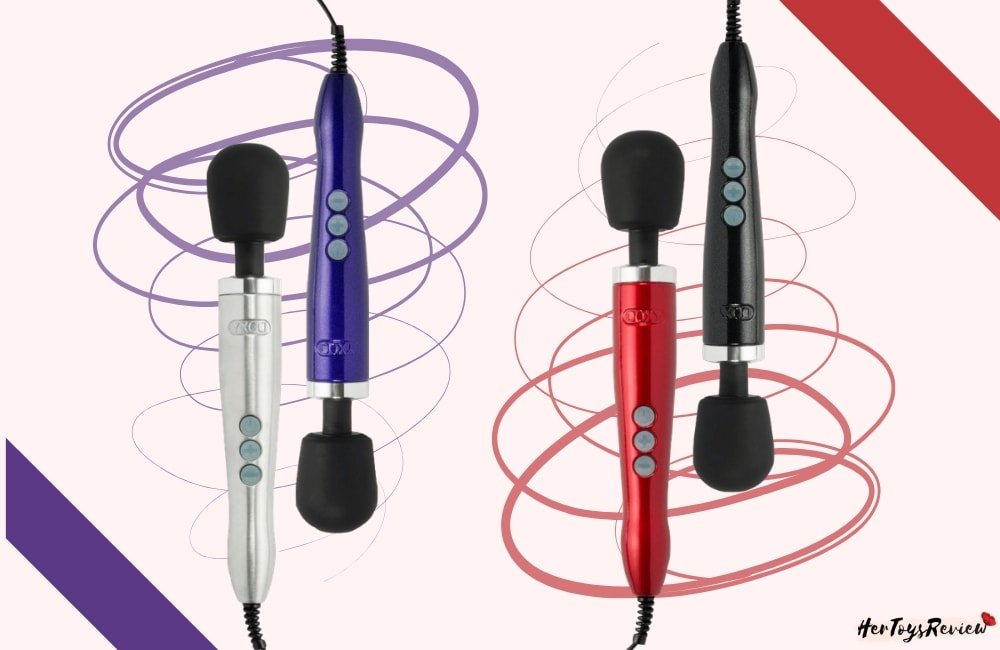 This is the strongest wand, ever! I love this magical thing and can’t wait to share everything with you in this review.

It took me quite a while before purchasing Doxy Die Cast because I feel the design of this toy is not pretty enough. This is a good example of “Never judge things by appearances”. Despite its old-fashioned look, the Die Cast is divine to use! It’s so intense that I feel like singing opera every time I reach an orgasm.

Want to make sure you don’t get counterfeit products and get good customer service? DO NOT purchase any sex toy from Amazon or Ebay. I strongly recommend that you order only from reliable retailers or official stores, like the ones mentioned in this post. Enjoy! 😃

NOTE: Doxy Site sometimes provides discounts for their popular models. I’m not sure how long the discounts can last, so if you’re considering purchasing a toy or two, You should really check out the available promotions on the official site.

WHAT IS DOXY DIE CAST?

The Die Cast is a mains-powered wand massager. The vibration is strong and rumbly and the toy is very straight-forward to use. The head of the wand is made of medical grade silicone, which is sleek and smooth against the skin and super safe to use.

You can use the Die Cast in any country because the toy comes at all voltages. All you need is to get a travel adaptor.

The Doxy Die Cast is quite weighted, especially at the top. The handle has a length of 9.5 inches/24cm with a total length (inc. the head and neck) of 13.5 inches/34cm. It is made of an aluminum and titanium alloy.

It is then coated with powder which gives it that sublime glittery look. The toy comes with 4 colors- black, silver, metallic purple, and metallic red. If you would want to have a luxurious one, Doxy also offers the wand in 24K gold.

It weighs 680 grams. The ‘neck’ of the wand is flexible and the head is made from a velvety smooth silicone. The head has a length of just shy of 3 inches/7.6cm and a circumference of 7.5 inches/19cm. The head of the wand fits many third-party attachments in the market.

No other fancy functions, Doxy Die Cast is dedicated to providing the best vibration (better than you can imagine).

This wand is truly rumbly and gives a deep tissue massaging feeling instead of buzzy surface vibrations that can lead to the numbness. This wand has the strongest vibration I’ve ever experienced. Period!

On the lowest setting, I actually think the wand is quite quiet considering the power that’s actually behind it. The higher the setting, though, and the louder it will go, and it does get quite loud. Although, as I said, I find the lowest setting quiet, make no mistake, this is still loud enough to be heard through a door – it’s just a lot lower than what I expected as the vibration is extremely strong.

HOW TO USE DOXY DIE CAST? 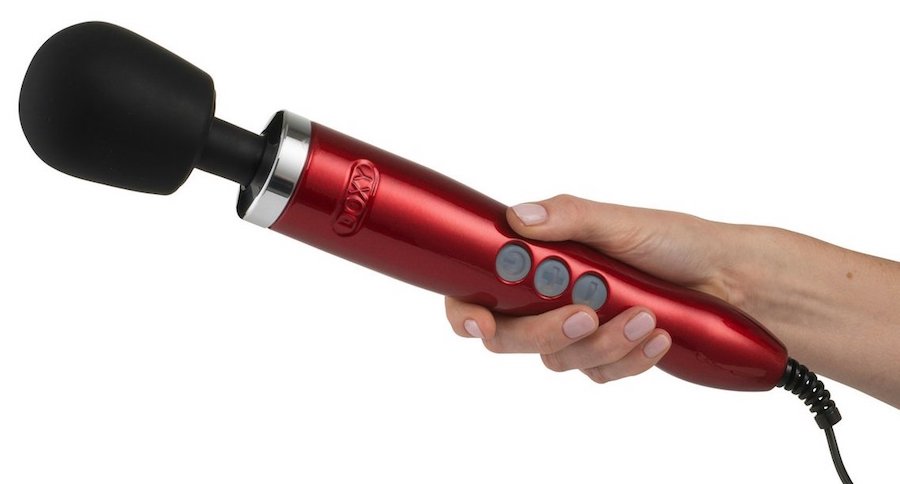 How to Adjust Intensity and Activate pulse setting?

The Diecast is incredibly easy to use. It comprises three buttons, a power button which switches it both on and off instantly; the other two buttons are ‘+’ and ‘–’, which increase and decrease the vibration intensity. You can either press the buttons continually or you can hold them in and it’ll whip through the multiple speeds quite quickly.

Pressing the power button will spring the Die Cast into life. The vibrations are rumbly, even on the lowest setting, they’re incredibly powerful.

The Die Cast wand also has pulse vibrations if that’s what you’re into and you can activate these by the following 5 steps:

1) Turn off the wand

2) Hold the power button for 3-4 seconds

3) Once the wand comes to life, use the “+” and “-” buttons to vary the length of the escalating pulse

4) Press the power button to turn off the pulse setting

Other Functions to Use

While in use, the buttons will light up in a lovely shade of blue. I’m a huge fan of this feature. It makes using the Die Cast in the night so much easier since I can see the buttons. I also find the light quite soothing. It’s not harsh on my eyes in the slightest and, when using the Die Cast for massage, the soothing light just adds to the ambiance of the room.

The Die Cast also has a memory function. So, when the wand is switched back on, it remembers the last speed that you used before you turned it off and it will switch on from there. Personally, I’d much prefer it to start at the lowest speed each time, as I much prefer to start from the lowest speed and then build myself up to the highest.

This function does come in handy, though, if you were interrupted and want to continue where you left off without messing around with the controls. For me, though, after every use, I turn it back down to the lowest setting so that it’ll turn on from there when I want to play. 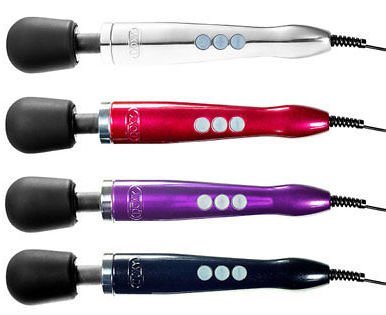 The silicone head makes the Die Cast much easier to clean. Using a soft and damp cloth and spraying on some toy cleaner will do the trick nicely. Don’t put any part of the toy in water or even hold it under a running tap.

It’s advised, due to the head, to use a good quality water-based lubricant as other lubricants may damage it. I’ve found that the more lube the better for clit stimulation, but lubricant (for me) wasn’t that necessary for body massages.

Besides, make sure you unplug your toy when it’s not in use.  It’s suggested not to leave the head cover directly exposed under sunlight. Also, for electrical safety, DON’T use the toy whilst it is covered or under blankets and DON’T operate the toy near, or in baths and showers.

WHAT’S IN THE BOX?

Simply, there are 4 things included in the box: 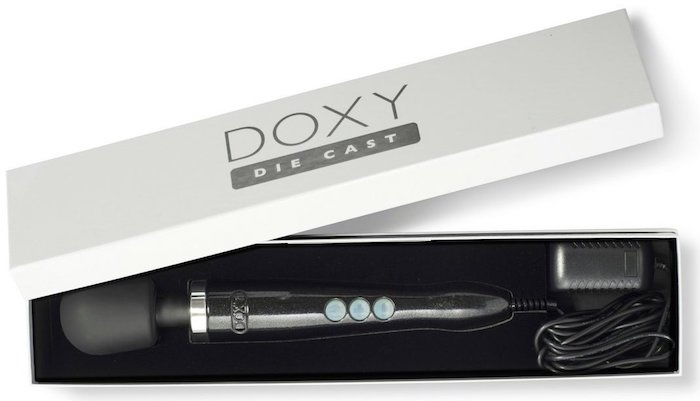 MY EXPERIENCE WITH DOXY DIE CAST

The Die Cast is absolutely perfect for massage, the rumbling vibrations really give me that deep tissue massage.

I’ve found that the wand is heavy, especially top heavy, so for massages, this works out great for me as I don’t really need to push the wand down – its own weight does that for me.

It works out great when I’m giving myself a back massage. I can lie on my tummy and put my arm over the opposite shoulder whilst holding the Die Cast in my desired location.

The extra weight pushes the head down more against my skin, meaning I don’t need to apply a serious amount of pressure, that way I can just let my arm rests on my shoulder blade and let the Die Cast do most of the work.

When I’m using the wand on my clitoris, though, I do find that my arm gets tired a lot quicker from holding it up. But these dopamine released from all the great orgasm can make me forget any soreness from the arm.

Doxy Die Cast is the perfect choice for power queens who adore strong and rumbly vibrations. I have a collection of wands but nothing has come close to the Doxy, in both power and rumbling vibrations. 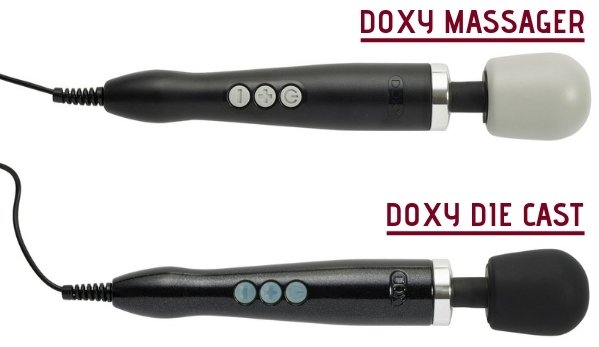 The intensity of Doxy Massager and Doxy Die Cast are the same. They both operate at around 20 Watts and the maximum vibration speed is around 9000 RPM (Revolutions Per Minute).

Due to the material difference, Doxy Die Cast is heavier than Doxy Massager and I feel the extra weight makes the vibration travel deeper under your skin tissue.

Other than that, Doxy Die Cast has a silicone head cover while the head of Doxy Massager is made from non-porous PVC. The texture of silicone is harder than the PVC, which gives a different feel to the vibration.

Regarding color options, Doxy Massager is in white, black, pink and purple while the Die Cast is in black, silver, metallic purple, and metallic red. Besides, Die Cast features LED-lit buttons, but not for Doxy Massager.

However, I personally more recommend the Die Cast. Firstly, I never keep any sex toy that is made from PVC, despite knowing its non-porous.

Besides, the extra weight works in my favor for a personal massage and it gives a more sturdy hold during the play.

I don’t really need to push the wand down, its own weight does that for me and the vibrations operates very well for deep tissue massage.

VERDICT: GET THIS RUMBLY WAND IF NOISE IS NOT AN ISSUE FOR YOU?

I can’t get enough of this wand. It’s simple but almighty. I recommend this wand to all my girlfriends who like strong and rumbly vibration. They all loved it! My clit is happy every time when Doxy touches her.

Besides, this is a great toy for body massage, it really gives deep tissue massage that helps relieve stress and muscle pain.

We-vibe Bond Review & How is it Compared... 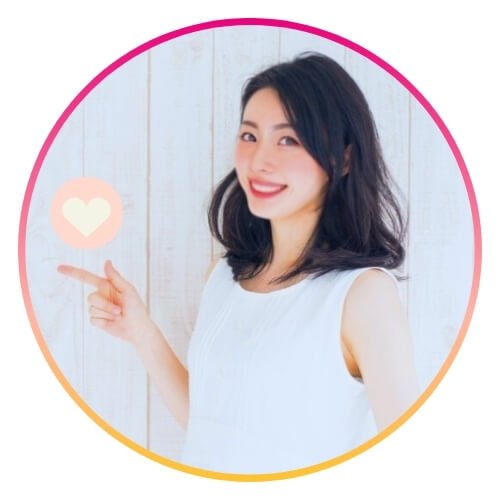